Counter surfing is a very common dog behavior problem and for some dog owners it seems the most difficult to deal with. The simplest way to explain why this is happening in the first place is that this is a perfectly natural dog behavior.

Counter surfing, just like chasing objects, is a type of dog behavior that we see as a problem, but that in reality is a perfectly natural and normal behavior for a dog. As some would say, this is just another little reminder of how different our two species actually are.

When mentioning that this is a dog’s natural behavior, it is important to realize that this implies that this can be extra hard and difficult to deal with. There are a few reasons for this:

Counter surfing is not the same as a dog stealing objects, in most cases, if a dog is stealing objects in order to get your attention that falls under attention seeking behaviors . With Counter Surfing, we are dealing with a dog’s primary instincts, the search for food.

How to deal with counter surfing

There are several ways to deal with this dog behavior issue. If you are a first time dog owner, you may realize that you will need to change some of your habits, not leaving food around, removing dirty dishes, etc. The best way to deal with it is by preventing it in the first place. 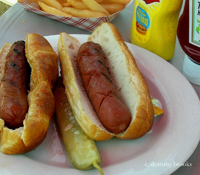 No matter how well trained your dog is, even if he is trained to leave food that is on the table or counter, if he is unsupervised for an extended period of time, in the presence of food, it is more than likely that your dog will decide to go for it, especially if he has done so at some point in the past. It can take as little as one time for this behavior to establish itself and become a strong pattern.

Prevention should be conducted in two ways:

As mentioned above, you will need to change some habits in order to help your dog succeed through the training period and beyond. This means that no food should be left around especially if there is any (even the remote possibility) that your dog can reach it.

No table scraps should be given to the dog, or feeding of any kind directly from the table or counter. Make sure that if you are eating in your living room or other areas in the house, that the food is removed when you leave. Leaving chips on the sofa, for example, while you go to pick up a drink from the fridge will create an opportunity that your dog will use.

This is a scavenger way of life in which other animals wait for the main predators to fill themselves and leave before they access the remains.

Make sure that you cover any and all possible scenarios in which your dog can access food.

Training your dog not to practice counter surfing

Yes, dogs have to be trained in order for them not to do it. If you are expecting that a dog should know this on his own; you are expecting too much of him and are completely ignoring his instincts and drives as an animal. There are a few steps that you should consider training with your dog.

One of the best approaches is to create rules about each of the areas where food can be present like the table, counters, coffee tables, etc. It is best to train your dog not to jump or climb on the table, counters, etc. and not even to stretch up on them. The closer the dog is to the food, the more likely it is that he will try to access it.

The second step is to train your dog the leave it exercise (command). It is important to train this command as this will be the communication language that you will use in order to train your dog to leave the actual food on the counter or table.

TIP: Keep in mind that just like every other type of training, the level of difficulty (in this case the distance, temptation and the endurance, etc.) is to be built up gradually. Avoid situations where the dog can actually break the command and access food. If that happens we are actually training our dog that if he breaks the exercise he can access the reward.

Corrections are one of the first things that most dog owners use in many situations. Counter surfing is one of them. In fact, it is one of the scenarios that will still upset even the most patient and calm dog owner. However, the approaches that may work in some cases in the human world, do not necessarily apply to our dogs. For example:

If you catch your kid stealing a piece of pie that you made for a special occasion and that you have told him not to touch, you might choose to apply some type of corrective measure and your kid may decide not to do it again. Now this is a complex situation that requires a unique skill of communication, understanding and the power to rationalize, etc. which means that your kid was able to see and understand the whole picture and then decided purposely to “break the rules”, with intent.

Dogs don’t have those abilities. They don’t rationalize, they don’t know that food on the counter is for some other purpose, in fact they don’t know what the counter or table actually represents. All they know is that there is food, and they see food differently than we do, simply because they have different animal drives and instincts that are triggered in the presence of food.

Corrections in the way that we might normally apply them likely won’t work. In fact, they can only produce counter effects like superstitious behaviors (cross-association fear behaviors). There are two types of corrections that are normally applied in these scenarios:

A correction made by the owner (or any other person that is correcting the dog at that moment) is the type of correction that normally doesn’t work. First of all, there is a directional aspect (the correction comes from the person) therefore the dog doesn’t necessarily relate the correction with the food. No matter how harsh you are in correcting your dog, it wouldn’t make him stop stealing food.

That food still tastes good to him and it is rewarding to him therefore he will simply start to learn that he can access it by simply waiting for you to leave, in order to avoid the correction. He is not learning not to take the food; he is learning not to do so in your presence.

The end result is simple:

The dog can’t make the connection between the correction and his action of stealing the food, and even if he does; the value of the reward (food) is higher than the potential unpleasantness of the correction.

The second thing is that we always tend to correct too late. For example, there are roughly four stages during the action of a dog stealing food from the counter:

If you are correcting your dog in the first two stages of the process and everything is aligned perfectly (the timing, the dog is not focusing on you or something else, etc.) there is a slight possibility that the dog will connect the correction with what your intention was and it may work.

However, if you are correcting your dog in the third and fourth stages of the activity, your dog has a 0% chance of connecting your correction with his action, or the power of the food will be much greater than the correction and he will probably decide to go for it again in the future.

Once the dog has the food in his mouth he is preoccupied with the taste and wondering where to eat it, and the eating process itself. A correction at this stage is now useless.

As mentioned above, corrections made by the owners/handlers rarely work and in most cases their dogs simply learn that they just need to wait for you to leave, in order to access the food.

If you were to use corrections in order to solve the problem, then setting up the scenario for an environmental correction is your best bet.

Many people set up scenarios such as something falling to create a loud noise as soon as the dog jumps on the counter or table to scare the dog (aluminum can filled with coins, etc.). Or they purposely set out food, for the purpose of creating an environmental correction that has been covered with lemon juice or Tabasco sauce, etc. Something that is not toxic, of course, but that your dog may find unpleasant.

In these cases, the dog has a chance of connecting his action with the correction however, even these can sometimes fail. For example, if the scenario wasn’t orchestrated properly, or if the dog has the type of temperament that he will quickly learn that after the initial shock of the noise (produced by his action of jumping on the counter), he can then access the food, uninterrupted.

I will give you an example where someone set up the scenario of an aluminum can that was filled with coins, tied to a fishing line running across the counter while he was in another room waiting for the dog to attempt his counter surfing and set off the “alarm”. At the very moment that the dog activated the “alarm system” the owner ran into the kitchen and immediately removed the food. He wasn’t yelling or doing anything to the dog, but just that sudden commotion was enough for the dog to learn.

He learned that his action (jumping on the counter) started an avalanche of reactions, first there was the initial shock created by the noise, followed by the stampede created by his (200lbs) owner and finally, all of that resulted in the removal of the food.

By orchestrating and timing everything perfectly, his dog learned that his actions can’t go unnoticed and that they result in the removal of the “reward”.

Did it work in the end? Yes, however the reason it worked was because the owner was able to control the environment, therefore the only times that the dog had a chance to try counter surfing, was when it was a set up scenario created for him to fail. If the dog at any point in time managed to reach that food without getting corrected, the whole thing would have been in vain.

TIP: Training only with corrections never brings the results you want, and in most cases it can create more problems than results. I would recommend that you control the environment, and train your dog what is expected from him, giving him an opportunity to be rewarded for the behavior you want instead of punished for the behavior you don’t want.